Amber Ritsema has been to countless Sunday church services in her life, but she will never forget the service on Sunday, July 26, 2015. The church she had attended her whole life, along with multiple generations of her family, was holding its last service before closing its doors forever. As she looked around at the congregation singing songs of praise for the final time together, Amber’s eyes filled with tears. That morning signified the end of an era for the church. What was God’s plan for the corner of Grandville and Clyde Park Avenues?

Grandville Avenue Christian Reformed Church was founded in 1897, to serve a fast-growing neighborhood of poor, blue-collar Dutch immigrants. Within several decades of its founding, the church built a school on its property, and by 1932 Southwest Christian School boasted a student body of over 900, making it one of the largest Christian schools in the US at that time. The congregation continued to grow, and by 1945 it had the biggest membership of any church in the CRC denomination, with over 1,600 members. The church had services each Sunday in both English and Dutch. 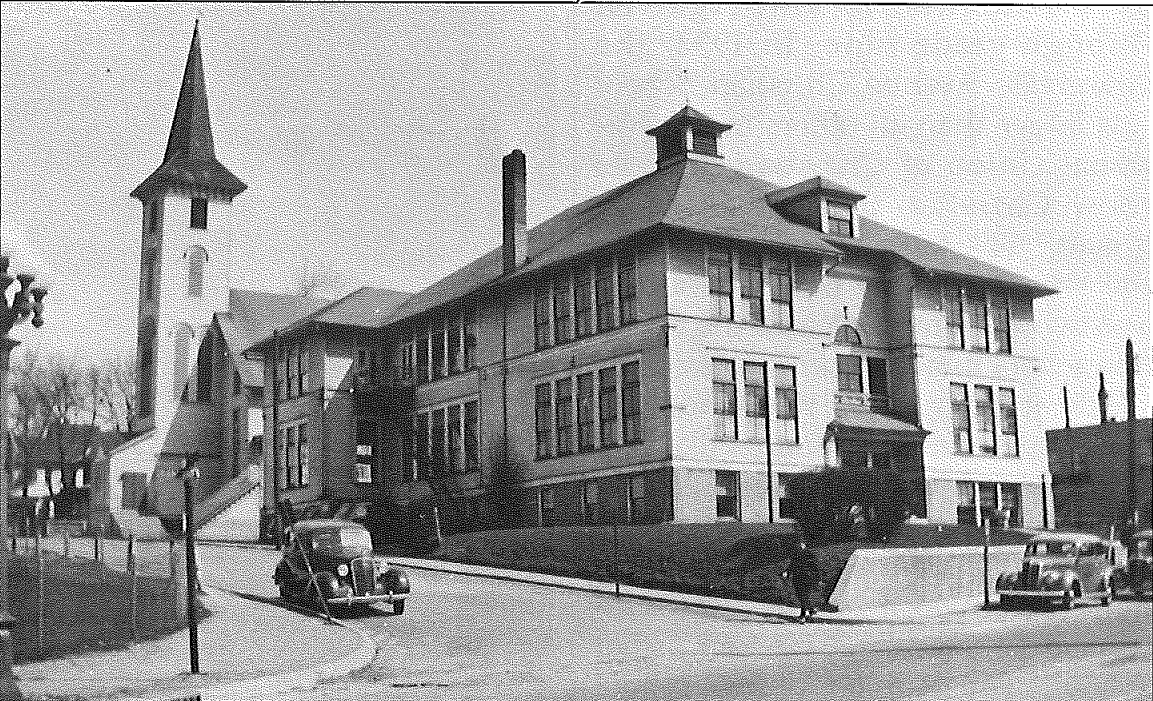 As the century progressed, the neighborhood’s demographics began to change. Dutch signs became English signs, and English became Spanish. Immigrants from Hispanic countries moved into the houses once occupied by immigrants from the Netherlands. Many of the church’s members moved away from the neighborhood and commuted to the church. The new neighbors had no connection to the Dutch Reformed tradition, and the membership of Grandville Avenue CRC began to dwindle.

During the 1970’s, the Grandville Avenue neighborhood gained some unlikely new residents: A group of young Calvin College graduates who felt called to share God’s love with this community—which, by this time, had unfortunately gained a reputation for poverty and crime. By their own admission, they were naive and unprepared for the challenges of urban ministry. But they felt strongly that God was going to work powerfully in the neighborhood, if they would be willing to follow Him wherever He led. Over the years, their efforts evolved into Kid Power, a weekly gathering of more than 150 neighborhood children who ate, sang, and learned about Jesus together. 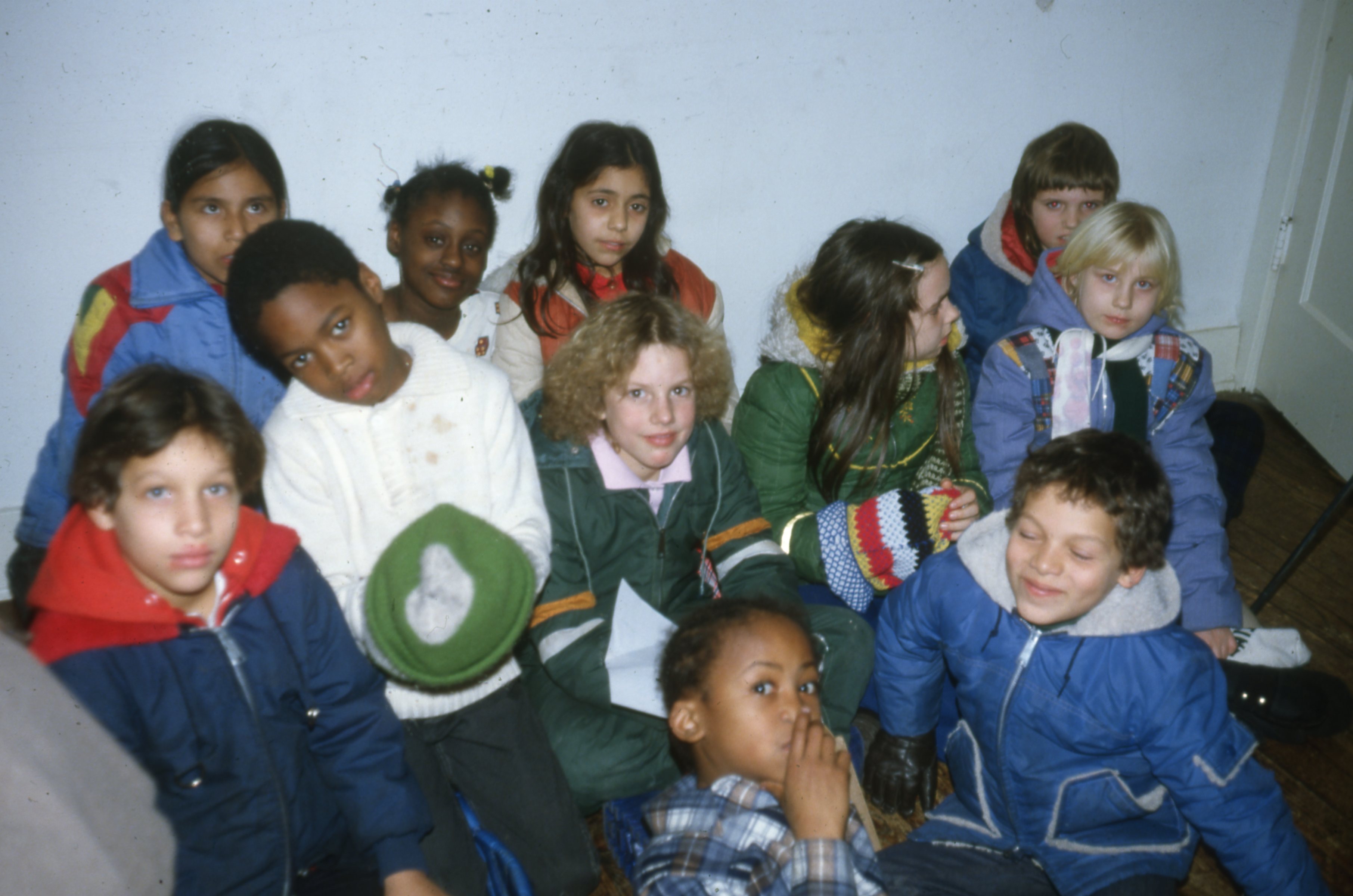 However, the founders of Kid Power increasingly felt powerless to address the significant emotional, academic, and spiritual needs of these kids. At that time, local public schools had some of the lowest graduation rates in the entire state, and children frequently suffered from traumatic home situations. The group was approached by Rev. Arthur Pontier, the pastor of Grandville Avenue CRC, who felt strongly that God was calling them to open a Christ-centered school. The idea was absurd and impractical for the twenty-somethings, but they decided to say “yes” to God’s calling.

Two members of the group—Mark Van Zanten and Nellene Duimstra—quit their teaching jobs and began recruiting students. They considered a number of locations for the new school, and after ruling out nearly every option, they asked the Grandville Avenue CRC leadership if they could use some of the classroom space in the church basement. 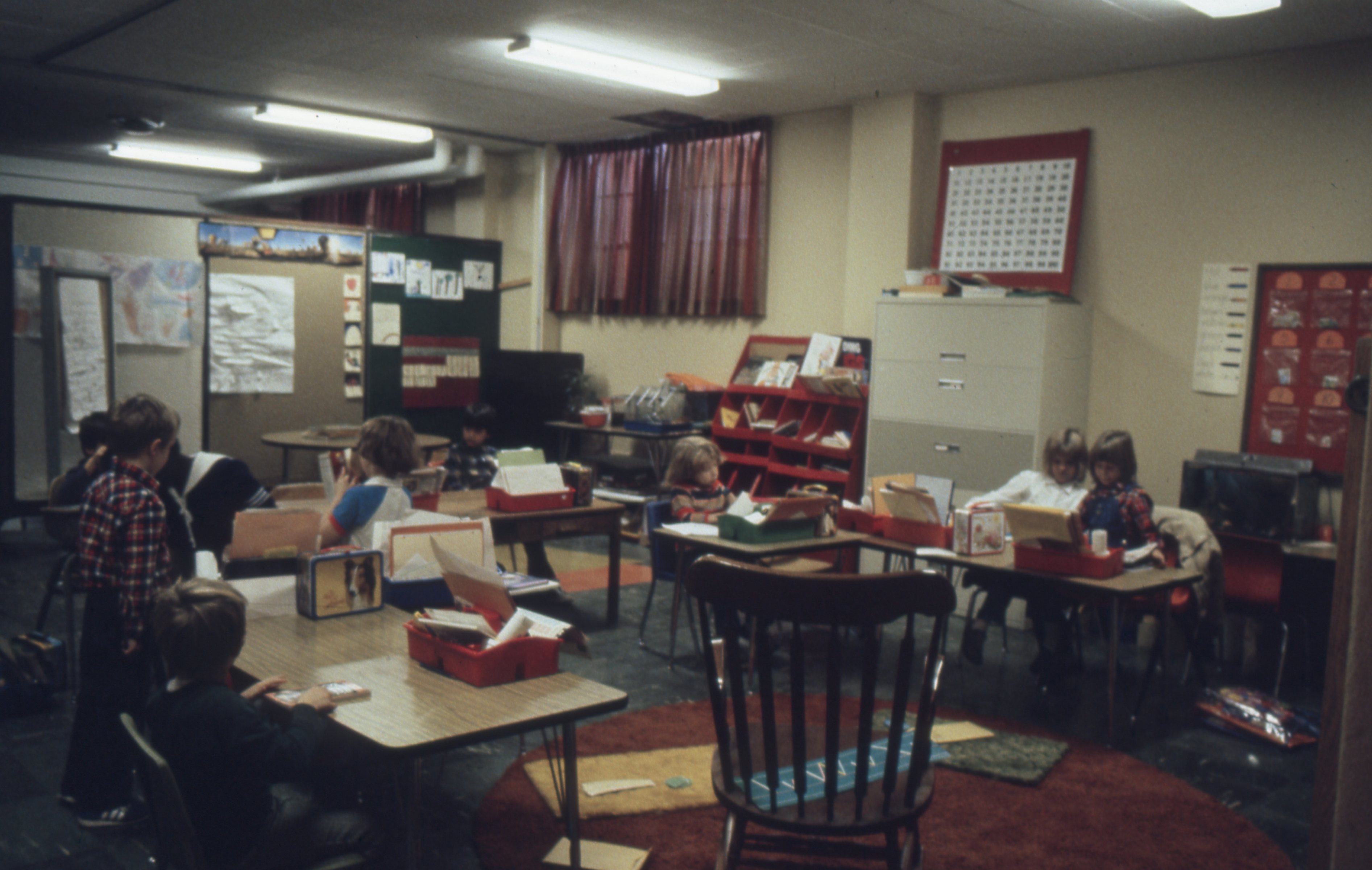 In the fall of 1981, “The Potter’s House” officially began, with a student body of 12. Nellene taught the 4th-6th graders in one room, and Mark taught 1st-3rd graders in the room across the hallway. Unfortunately, this was the same room where the church’s elderly members played shuffleboard on Tuesday mornings, which forced Mark to relocate his class to the choir loft every week at that time. The Potter’s House faced skepticism and doubts from many people during that remarkable year, including the founders’ own families. But they still felt strongly that God was the author of their unusual story, and they looked to the future.

For The Potter’s House to have any future, it needed a more permanent space. A fire marshall had only given them permission to use the church basement for a year. Adjacent to the church stood the Southwest Christian School building, which had closed several years before. Even though it was far larger than they needed at that time—Mark remembers joking that each student would get their own classroom—the school’s founders believed God wanted them to have this building. They walked around the abandoned school seven times, in an echo of the biblical story of Jericho, praying fervently for God’s will to be done. Mark heard an audible voice telling him that he was standing on holy ground.

What happened next is one of the landmark moments in the story of The Potter’s House: God miraculously provided the funds to buy the school building through the generosity of local Christian business leaders. The school moved 100 feet up the street from the basement of the church to its new address, where it still exists today. Years turned into decades, and God brought more and more children to be educated and loved in this space. 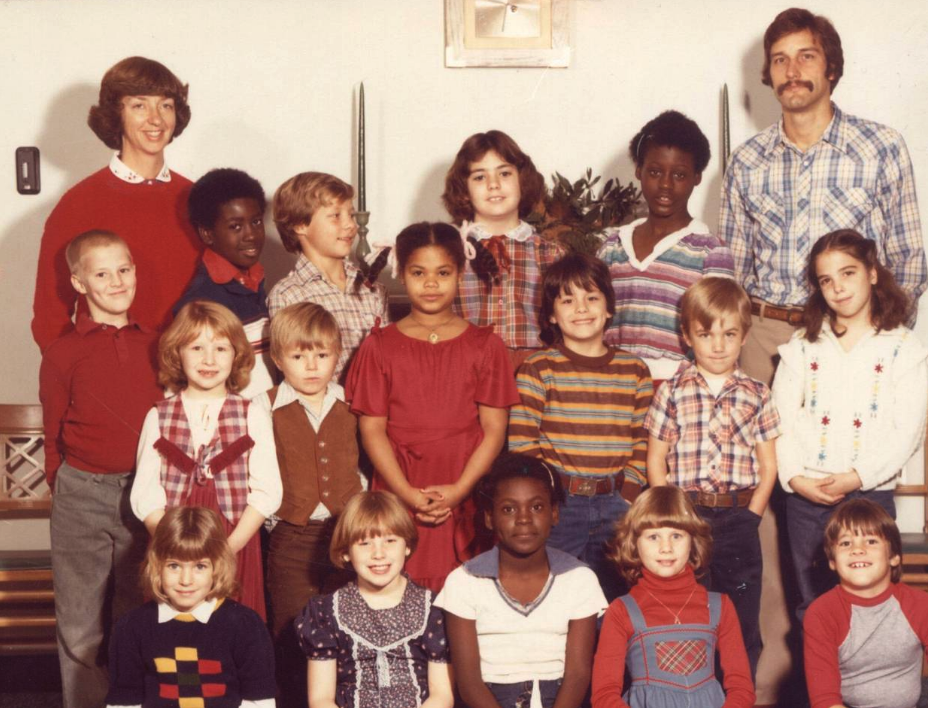 However, as The Potter’s House grew, the church next door shrank. Very few of its members still lived in the Roosevelt Park neighborhood; most commuted from the suburbs where the neighborhood’s descendants now lived. In 1994, Grandville Avenue CRC merged with nearby Bethel CRC to become Roosevelt Park Community CRC, and Pastor Reggie Smith accepted the call to shepherd the congregation. Pastor Reggie wanted to reclaim the church’s historical identity as a congregation of, and for, the neighborhood in which it stood. The church offered a variety of programs to the community, including summer camps for kids, English classes, and income tax assistance. Through these years, The Potter’s House maintained a strong connection to the church next door. Discipleship programs, music classes, and graduation events took place at the church building. Church and school partnered on many neighborhood outreaches.

Twenty years into its rebranding, Roosevelt Park Community CRC had become known as a pioneer of urban ministry in the denomination. Yet its congregation continued to dwindle, and financial pressures mounted. In 2015, the church leadership made the difficult and controversial decision to close the church and put the building up for sale. For long-time members like Amber Ritsema, it was a painful and confusing moment. What would become of this beautiful place, which had been filled with prayer and praise for over a century? “We know that only when we embrace death can there be resurrection,” commented Pastor Reggie in 2015. “I trust God will be doing something new and great here on this corner in the future.”

As he pondered the church’s closing, TPH Superintendent and co-founder John Booy wrestled with the same thoughts and questions. In 1981, the school’s founders could not have possibly  imagined having enough students to fill the entire school building. But by 2015, the student body at the Roosevelt Park Campus was well on its way to 400, and threatened to overflow the building’s capacity. Could the church building be a way for the school to grow? John asked some of the school’s donors if they would be willing to help cover the cost of buying the building. They responded enthusiastically, and in a matter of weeks over $300,000 had been raised. The church building officially became the property of The Potter’s House.

But as John and the school’s leaders were well aware, simply owning the church was the first step in a long journey to transform it into a school building. The Growing Hope Campaign launched that year, with the goal of raising $9 million to cover extensive renovations to the church building, as well as the high school campus. Plans were drawn up for new classrooms in the lower level of the church, as well as many other improvements to the building. (Several local congregations have been using the church on the weekends; the renovated space will help serve them even better.) Once again, God has provided abundantly. To date, more than $12.3 million has been given to the campaign—although the construction costs rose well beyond initial estimates, to a current total of $14 million. 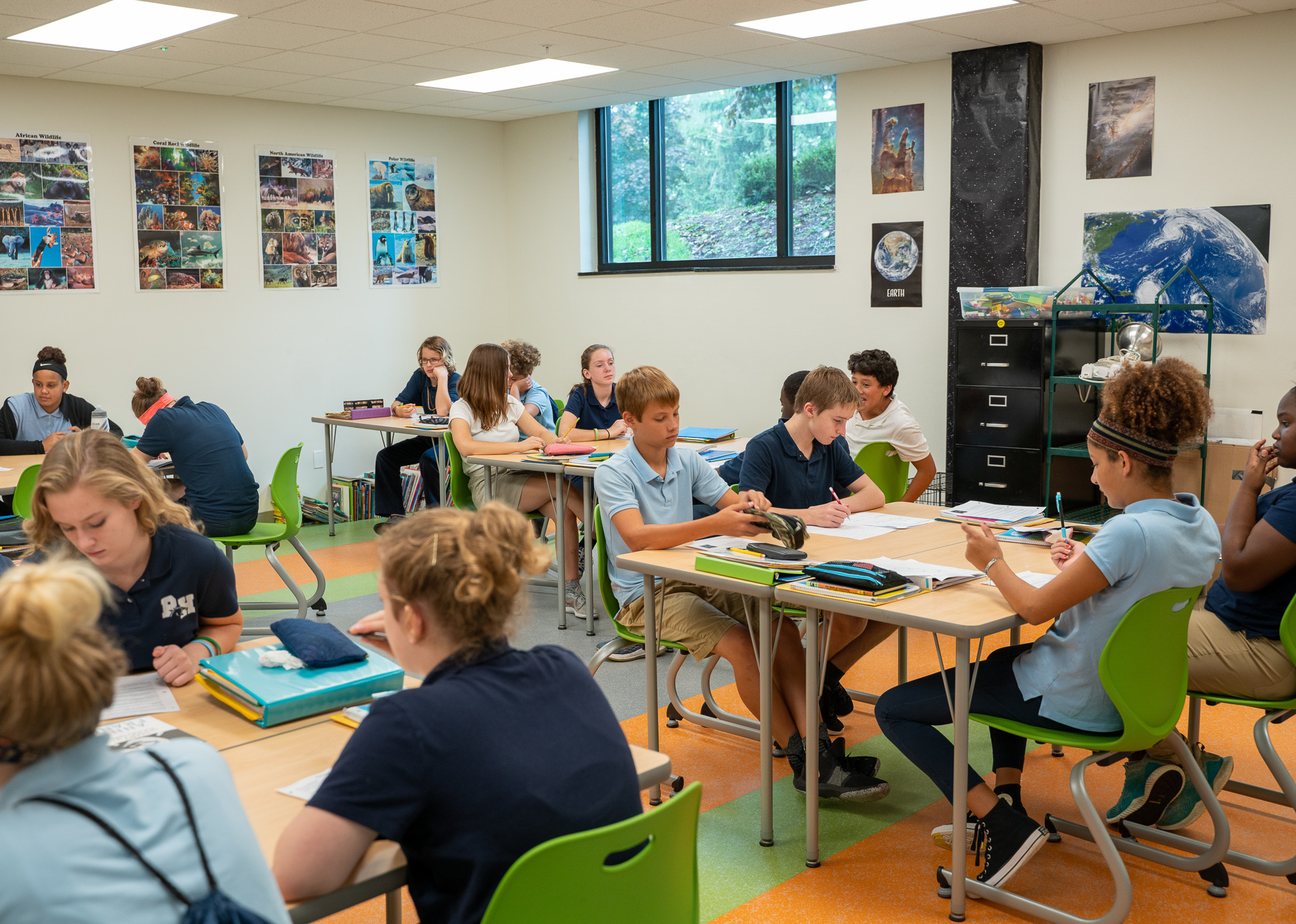 This summer, the church became a construction site, as dozens of workers from Rockford Construction transformed the building into The Potter’s House Chapel. With days to spare before the beginning of the 2019-2020 school year, the new music, science, art, and computer classrooms were approved by the fire marshall. As students entered the science classroom for the first time, they walked over a carpet that hides an old shuffleboard court. Drywall has replaced a temporary divider; whiteboard and projector have taken the place of blackboard and chalk. The past and future of The Potter’s House are together in one place.

On August 26, the first morning of the new school year, a bright-eyed group of kindergarten students walked with John Booy and PreK-8 Principal Mark Ponstine into the church building and up the stairs to a small room on the second floor. From inside a slender wooden cabinet unfolded a long rope, which the students pulled together in rhythmic movements. With each pull of the rope, the clear notes of the church bell resounded above them. The bell announced to the neighborhood that this old building is open again, a place for all people to worship God and learn about him, whether white or brown or black, immigrant or native-born, poor or rich, young or old. For Amber Ritsema, the transformation of Roosevelt Park Community CRC into The Potter’s House Chapel is especially poignant. She attended TPH herself, and taught here for several years. Her son is now a Potter’s House student. “God didn’t leave,” she insists. “His mission is still the same: to reach the hearts of his children, and that just looks differently now, but in a beautiful way.”