When I was young, I wanted to be a missionary. When I think about it, my childhood dream really did come true, but in a way I never could have expected or imagined.

I’ve known God my whole life, but in my senior year of high school, I experienced the power of the Holy Spirit in a powerful and personal way. I started going to a prayer group and Bible study that John Booy also attended. After I graduated, I was spending so much time with this community that I moved into an apartment with some of them. We met multiple times a week for prayer and shared meals together.

We were living in downtown Grand Rapids, but we sensed God was prompting us to move, so we started praying about where God wanted us to be. He led us to the Roosevelt Park neighborhood. We bought two houses, one for the girls and another for the guys. We tried doing outreaches to the adults in the neighborhood. We had a singing group, and I can remember being on Grandville Avenue, playing my tambourine and singing, and having neighbors come and watch. But it didn’t feel like it ever went beyond that experience. We weren’t really doing any discipleship.

We tried opening up our homes and sharing meals with our neighbors. A few adults came, but mostly it was kids who were lining up at the door to get some food and listen to us sing. That turned into a Tuesday night program that the kids decided to name “Kid Power.” We started with ten kids and ended up with almost 200 kids every Tuesday night. We also began a second-hand thrift shop called Jacob’s Well, right here on Grandville Avenue.

I never went to college. Most of the others in the group had college degrees and were teachers or nurses. I worked at a bank, so I was the banker for the group. In 1981, I was asked to become the director of the Roosevelt Park Neighborhood Association. I learned a lot about grant writing and community outreach while working in that role.

Around the same time, Rev. Pontier, the pastor of Grandville Avenue CRC, approached a couple of people in the group with the idea of starting a school for neighborhood children. As we prayed about the idea, our vision became to have a small school of only 30-40 neighborhood kids. We knew God wanted us to step out in faith, but we had no clue what He was going to do with it, and where He was going to take it.

The group prayed to ask God what the name of the school should be. We came up with a lot of crazy ideas, but nothing really resonated. During one of our times of fellowship and prayer, we sang a song called “The Potter’s Song.” The lyrics are based on the passage from Jeremiah 18:1-4:

As we finished the song, I remember exclaiming, “‘The Potter’s House!’ That should be the name of the school!” The others quickly agreed, and the name stuck.

In the early years of the school, I helped in a variety of different ways. I filed the nonprofit legal paperwork, I graded tests and term papers; I helped paint and set up and tear down. By the ‘84-’85 school year, the school had about 50 students, and they decided to hire me to help out in the office. I took care of student records, fundraising letters, receipts, and whatever else needed to be done. In 1989, we decided to do our first fundraising banquet. I organized the whole thing pretty much by myself in about six weeks. We invited as many friends and family as we possibly could, and over 800 people showed up.

At each step in our growth, we prayed fervently for God’s guidance about what to do. The school was becoming much larger than we ever imagined. The needs of the kids we served were just overwhelming, and our waitlist grew to 150 students. Outside of God, this school makes no sense. It couldn’t happen. We’re always at the point of needing to totally trust Him to meet our needs. And He keeps providing, over and over.

As a behind-the-scenes person, I have less contact with the students than the teachers or other staff, but I’ve had some unique opportunities to serve our families. Many times, parents have sat and cried with me about their difficult family situations and financial circumstances. I’ve listened to them and prayed with them and tried to share God’s love with them. Sometimes I’ve taken students into my home for weeks or months at a time when their parents couldn’t care for them.

I got married in 1992, and we adopted our son David in 1996 from India. Our daughter Katie, whom we adopted in 2000, comes from an extremely difficult background. At age 16, she was on the verge of being homeless, and we decided to take her into our family. She graduated in 2004 from The Potter’s House High School.

Over these years, God took that tiny seed of faith and has done this amazing thing that has impacted the world. The unique mission of The Potter’s House has spread to schools across the country and the world. Honestly, if we had known then what we have to do now to keep the school going, we probably would never have taken that step of faith. But when I think about what God did with that seed of faith, I wonder why I ever doubt Him about anything. 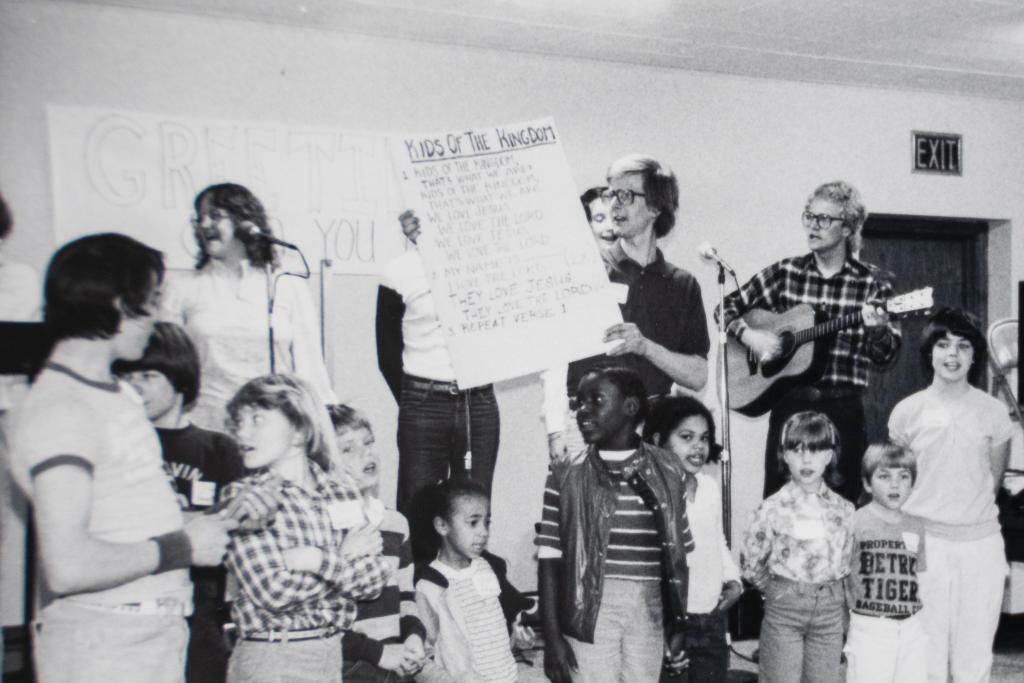 Sandy (top left) singing songs with the students of The Potter’s House during its first school year, 1981-82.

[Adapted from an interview with Sandy Gardner, TPH Business and Finance Manager]