I am from Togo, a country in West Africa. I started school at a very young age. The school system in Togo was not favorable toward girls, and teachers felt that girls were just wasting their parents’ money and time. By being a girl and the youngest student in my classes, I felt alone.

For many years, I was always the first in my classes. I, and many other girls, worked very hard in our studies, but we could not become leaders in our classes. In my school being a leader proved that you were an excellent student, at the top of your class. We were denied the privilege of being leaders, even when we excelled far beyond our male peers. We were told that boys came first. At times I felt I wasn’t enough, or I hated myself for being born a girl. I would think, if I had been born a boy, maybe I could make my family’s life better.

Girls were not encouraged to attend school beyond middle school and were told they didn’t belong in upper classes. Many girls were struggling, and I wanted to change things. We were only kids, but we felt that the system was not fair (even some boys felt the same way). I decided to talk to other parents, and some of the students talked to theirs. The parents listened and advocated for us and the result was an important meeting with the Headmaster of the primary school. He was angry when he learned how the teachers were treating girls. This was encouraging and I saw that when we try hard and work together, things could change. It gave me hope.

However, by the time I reached middle school, things had not changed; the oppression was there. Some of the teachers always gave me bad grades and my GPA was going down. If I tried to ask why the bad grade or say anything, the teacher would forcefully say, “I am the teacher!” I had no voice.

During this time, my father was working in the United States to earn money for my education. On a visit home to Togo, my dad learned how poorly the teachers were treating me. He said that I should come to the US for a better education and a better future. My oldest sister and I came to the US with him. We stayed in New York initially, but soon moved to Michigan. My cousins in Grand Rapids were attending The Potter’s House (TPH) and thought it would be good for me as well. I was a junior, but because I did not speak English, I was enrolled as a freshman.

My plan was to learn English, do my schoolwork, graduate and go to a university. I was not trying to make friends or be close to anyone (I was used to being alone). Besides, I was scared and felt weird being older than the other students.  After a few weeks at TPH, I met my first friend. For the first time in my life someone invited me to her house for a sleepover, which was strange for me because sleepovers are not allowed in Togo. We didn’t speak the same language, but she tried so hard to communicate with me. That impressed me.

My chemistry teacher, Mr. VerBeek, encouraged me to enroll in the advanced chemistry class. That was the first time a teacher believed in me. My English/civics teacher, Mrs. Sisco, would ask, “How are you doing? Do you understand this?” I did not know why they cared so much about me. I was not used to teachers caring.

During my sophomore year, I wanted to go on the class trip to Mexico, but knew that my father could not afford to pay the full amount. I went to Mrs. Sisco and shared the concern with her. She said, “Let’s pray together.”  Although I grew up going to church, I didn’t have faith at all. We prayed together, but I didn’t believe. I thought if something happened, it would be because of her faith, not mine. To my surprise, people donated money and hired me to do work for them. I went on the Mexico trip.

On the trip, I was so scared. I knew the ESL students, but I was not close to the other students. I opened up and talked and made new friends.  My family was having a hard time with housing during this time, and it was affecting me. The students learned of my predicament and comforted me. High school principal Mr. Clark, who was on the trip, learned of my situation as well and prayed for me. I wondered how teachers could pray for me, a girl with no faith? The Mexico trip taught me how to believe God and trust others.

When I first came here, I felt truly alone. I didn’t try to get close to anyone. But The Potter’s House changed me. For the first time in my life, I want to trust people and get close to them. I am not alone anymore, and for that I am grateful.

Thank you, Potter’s House teachers, for changing my perspective of the world. Thank you for believing and trusting in me.

I will be attending Michigan State University in the fall, majoring in biochemistry and molecular biology, in preparation for pre-med. 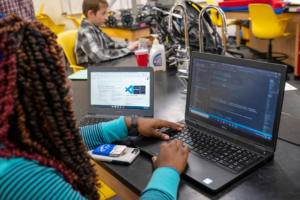